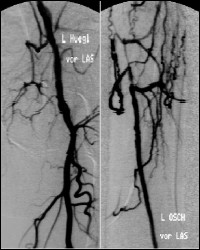 Percutaneous transluminal balloon angioplasty (PTA) is a minimal invasive therapy option for the treatment of peripheral vascular diseases (PVD) or peripheral arterial diseases (PAD) in addition to other conservative therapies, lysis and vascular surgery. With significant development of catheter technology in the last decade it is possible to even perform extraction procedures today, especially procedures like Rotablation and ELA are being increasingly gaining prominence. Despite the impressive initial success rate of PTA, it has to two major disadvantages: firstly it is associated with a high restenosis rate which lies at about 50-60% and secondly it is only possible to treat the lesions that are accessible by the guide wire. Hence the performance of PTA is limited to stenoses or occlusions measuring less than 5 cm in length. In occlusions longer than 5 cm, the lone performance of PTA is not frequently successful. Such cases present the indication for performance of "Debulking" like the Excimer Laser-assisted Angioplasty. 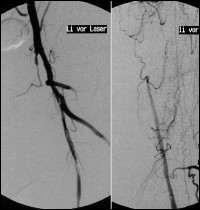 Figure 1b: Follow-up DSA after recanalisation of the long segment occlusion of left superficial femoral artery with a 2,5 multiphase catheter. The follow-up angiography shows a now patent vascular lumen but still with evidence of restenoses and a dissection. 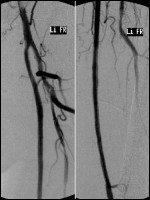 Principally the laser-tissue interaction is due to the absorption of photons and the duration of laser application. Thus, the absorbed (deposited) photon energy is converted to another form of energy in the tissues (for e.g., thermal, chemical and mechanical energy). The depth of tissue penetration by the laser is determined or dependent on different wave lengths of the laser. The main thermal changes caused are coagulation and vaporisation of the tissues. The photothermal changes are mostly brought about by the use of Nd:YAG and Argon Laser. Photoablation and photodisruption (optical penetration) are grouped into photoionising and oligothermal changes which is characterized by application of high density rays for a very short affection time (laser pulse in nsec likewise in µsec). The photoablative change is achieved by the pulsed Excimer-Laser. The photoablation leads to rapid necrosis of the target tissue with minimal thermal effect of the surrounding tissues. Hence, the necrosed zone of the surrounding tissue is less than 50 µm whereas the thermal necrosis of the target zone is more than 50 µm.

Placement of the balloon catheter within the artery.

Dilatation of the balloon catheter within the artery.

The consent should be taken a day before at the least.
Patient consent on day of therapy only in case of emergencies.
In children below 16 years of age, a written consent of the parents or guardians and when possible signature of both should be obtained.
In case of unconscious emergency patients, a written understanding between the treating doctor and radiologist should be obtained.

Blood parameters should not be older than 2 weeks (TSH 4 weeks).
Report should contain:

On the Day of Examination or Intervention

tThe patient should not eat, drink or smoke 6 hours before the examination.
Oral medications and insulin can be taken after consultation with the treating physician.