On the following pages we would like to inform you about Trans-Pulmonary Chemoembolisation which is also offered at our institute.

Primary and secondary tumours of the lung are supplied, amongst others, by vessels originating from the pulmonary artery. Chemoembolisation of these blood vessels causes ischaemic necrosis of the tumour tissue, especially because of the selective application of the chemoembolisation material directly into the lesions. About up to 20 times higher concentration of cytotoxic drugs can be achieved by this method when compared to systemic chemotherapy with reduced adverse effects. By cutting off the vascular supply, the reaction time for chemotherapy in the tumour tissue is prolonged up to several weeks.

There exists various possibilities for the treatment of lung tumours such as surgical resection or Laser-Induced Thermotherapy (LITT), the latter is also performed regularly in our department. Furthermore, other local ablative procedures are available. Beside local therapy options, diverse systemic chemotherapy regimens might come into application. The choice of therapy, combination of different procedures and also the time of starting the therapy have not been standardized and are adapted to the individual patient needs.

After disinfection and local anesthesia, the femoral vein which is located in the inguinal region is punctured. A small femoral sheath usually is placed in the vein through which different catheters or guide-wires can be inserted.
After visualising the venacava, a catheter is pushed forward into the tumor feeding vessels via the pulmonary artery. Inorder to prevent pain during the procedure analgetic drug-infusions are administered. Chemoembolization drug typically is composed of Mitomycin C as the chemotherapeutic agent and Lipidol and Spheres as the embolizing material. Additionally, other cytotoxic drugs could be be applied depending on tumor-response.
Affter the completion of the procedure, the catheters and the sheath-system are removed and a compression bandage is applied in order to prevent complications such as haematoma. After surveillance of 6 to 24 hours, in which complications might be detected and traeted, the patients is discharged. In order to evaluate response to treatment and to diagnose complications, a CT-Scan is performed 24 hours after the procedure. Treatment normally is repeated two to three times at intervals of four weeks, but some cases may require more sittings. The purpose is a symptomatic palliative therapy option. 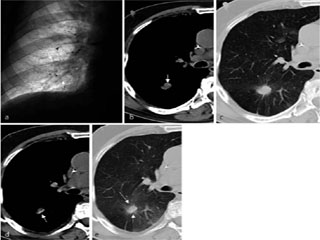 Reduction in metastasis-size of a thyroid carcinoma after three cycles of Transpulmonary Chemoembolization ( 12 weeks after initial treatmanet). High lipiodol-uptake in the cancer-tissue.